A Tale of Two Rooney's 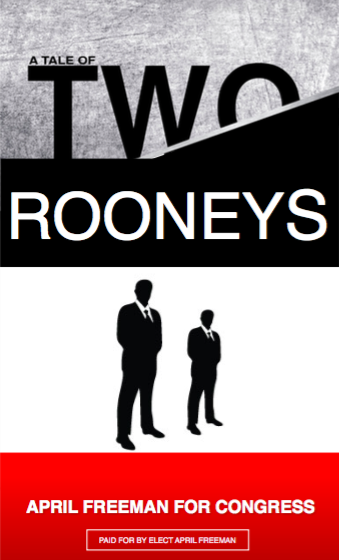 You've heard over and over that I am running for Congress to replace Representative Rooney.

After commercials throughout Southwest Florida, you might be asking yourself, which one? Are there one or two Rooneys? Are they clones? Were they switched at birth? Is this some type of joke? Or, how is she going to raise enough money to compete with this?

Here's your answer: Yes, there are two Rooney's, no they are not clones, they were not switched at birth and we'll get to the raising money part in a minute.

To be clear, I'm running against Tom Rooney NOT Francis Rooney.

So why all the confusion? Well, that might be because I ran for Congress in 2014 in District 19.
Initially, I ran to replace Trey Radel, but when he resigned after serving only a year into his 1st term. I ran to replace him in a Special Election but lost to the Republican self-funded Big Spender, Curt Clawson.
It was immediately clear to me that Mr. Clawson did not like the job and I wondered if or how long he would stay, so I immediately announced my plans to run again this year but I changed my mind last December, when re-districting gave me the opportunity to move to District 17.

Seems I was right about Clawson, as he's not running for reelection --que the circus and self-funded big spender number 2.
This year the 19th Congressional Election in SW Florida is another blood-bath reminiscent of the 2014 Big Spending Millionaires and Super PACs.

This time Francis Rooney is spending $300 thousand a week on ad buys.

I can win in District 17 or I would not be running there. I need to swing a reasonable number of voters and we're working hard everyday to reach those voters.

Rep. Tom Rooney is NOT a self funded big spender and he's not spending money to win against me. Instead, he's making large donations to candidates in other races and giving large sums back to his party.

Tom Rooney, doesn't think he needs to worry about me and that's good, we want to catch him off guard.
With your support now, we can reach voters with our message before vote by mail ballots hit mailboxes in only 10 weeks.
Let's give my opponent Tom Rooney the surprise of a lifetime on Election Night when he loses to me, and he's forced to pack up his toys to vacate my new office in Washington.

Together we can give the People in Florida's New 17th Congressional District real representation in Congress.

I look forward to being a voice for The People in Washington.