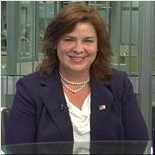 Lytle: This is a very Republican district. And even the Democratic candidate with a ramrod-straight, clear message, like Jim Roach, who tried twice in vain…how will you succeed where others have failed?

Freeman: You know we only had one election cycle after the redistricting, to be fair, and I have an extremely professional team to put together a clear message and we need a change in Washington. And I think that the people in this district understand that and I think we will be successful.

Lytle: But there are Republicans in this race and independents and some Libertarians who say the same thing.

Freeman: Yeah, well, with them you're going to get more of the same. You're going to get a clone--clones, actually--of what is already there. So hopefully voters realize that we do need a change. I'm that sensible voice and I hope that appeals to the people of the district.

Lytle: Give me an example.

Freeman: If you elect a Republican such as the people that have jumped in, they're going to the voting for the same policies. We're going to have to worry about government shutdowns, debt-ceiling limits and all of the same issues that we worry about currently. A refreshing voice and a different perspective on those would be me.

Originally published in the Naples Daily News on Sunday, January 26, 2014