Taking the Politics Out of Lake O 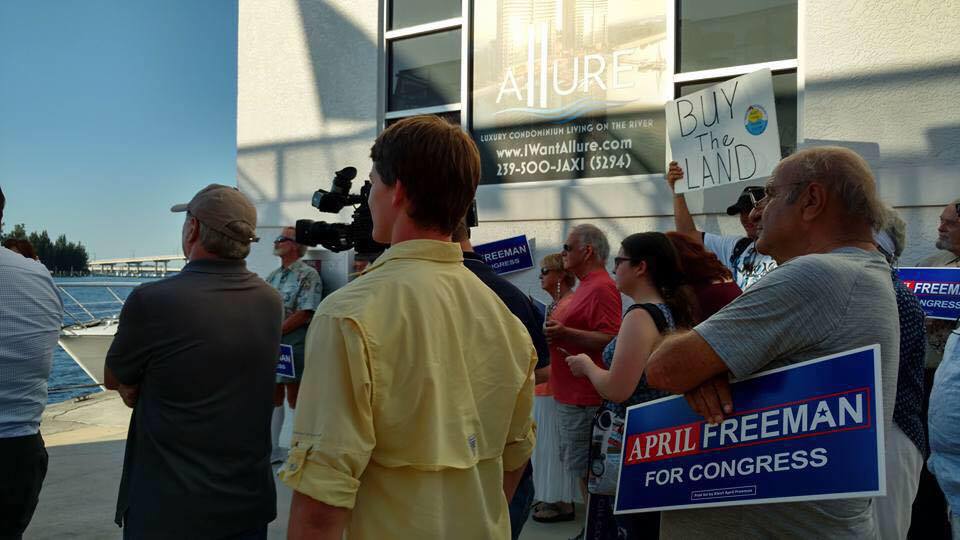 Guest Op-Ed: Taking the Politics Out of Lake Okeechobee, out of Tallahassee, and Away From Florida All Together!

I’ve been an environmental activist for years, and closely following the water release issues from Lake Okeechobee for as long as I can remember.

Unseasonable heavy rains in January, have caused earlier than usual water releases from Lake Okeechobee — releases flowing east through the St. Lucie River, and west through the Caloosahatchee River.

The Caloosahatchee River divides much of CD17 where I’m a candidate, and that of CD19 represented by Republican Rep. Curt Clawson. The releases are a toxic flow all the way to the Gulf of Mexico, but not without causing irreparable damage to estuaries, and to the federally protected wetlands and wildlife of J.N. Ding Darling National Wildlife Refuge.

The largest obstacles surrounding Lake Okeechobee are political power plays that surround the land just south of the Lake.

Add these political games to elected officials owned by lobbyists, and we have disastrous, do-nothing legislators, stuck in gridlock.

This is why I’ve adopted the mindset; the politics of Lake Okeechobee need to be removed from the hands of our local elected officials, out of Tallahassee, and away from Florida all together.

We need to stop making excuses, stop pointing the finger of blame, and just fix the damn thing.

After giving the action much thought, intensive research, and discussing possibilities with local activists, elected officials and environmental specialists, I have come up with a real solution to the huge problem affecting much of Florida.

Better still, I’ve discovered something I could do immediately to fix the issues surrounding Lake Okeechobee before I’m ever elected to Congress.

The federal government already owns and maintains the Herbert Hoover Dike surrounding Lake Okeechobee. The dike is in serious disrepair and the lake water is polluted.

Because of the dike’s current condition, the early rain has caused the Army Corp of Engineers to release the poisonous water from the lake into the rivers — releases flowing through the Caloosahatchee River are killing the protected wetlands and wildlife of J.N. Ding Darling National Wildlife Refuge.

Therefore, I have come to the conclusion; it makes perfect sense to Designate Lake Okeechobee a National Monument through Presidential Executive Order, and I’ve already started the process.

A process often used by community leaders to have their causes thrown to the front of the line for action from Washington. A process that only requires support for the action comes from a reasonable number of people in our nation.

I’m using the White House Petition site — We The People, and I’m asking all Florida residents and U.S. citizens to get involved today — you only need to sign our online petition and it is ready for your support right now.

The Petition has until May 5, 2016 to gather 100,000 online supporters in order for President Barack Obama to respond to "our" request, and use the powers vested to him through the Antiquities Act of 1906 to Designate Lake Okeechobee a National Monument.

This action would expedite the cleanup, and ensure appropriations for needed repairs and water quality projects, resulting in a safe and healthy future.

The petition works hand in hand with House Bill 4793 introduced to Congress by Republican Rep. Curt Clawson that would authorize the Federal Government to purchase lands south of Lake Okeechobee, but forms only part of a viable solution.

Should House Bill 4793 be signed into law, our petition provides specific provisions for transferring the new federal lands as part of the monument designation.

This real solution will end the political gamesmanship surrounding Lake Okeechobee and the resulting issues that plague our beautiful state.

It's important we rally the community to make this happen, showing once and for all that We The People have the power to implement change.